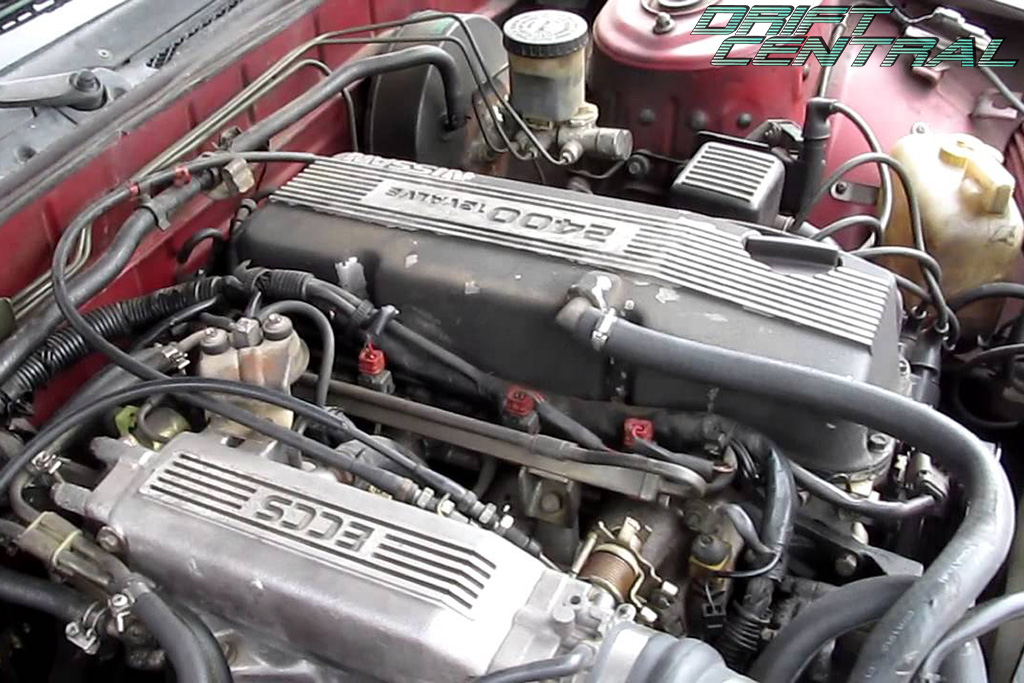 Hello Drift Fam, thanks for your valuable time. Now the image you see above is not a joke; it’s part of a tradition of low powered cars put together with a high setup IQ and a heavy emphasis on driving technique. In anticipation of the many stock engine S-chassis at the upcoming event we put together this conversation between four drifters who were kind enough to share specifics about their setups, their adjustments, and their philosophies on building and drifting their cars. First we will start by introducing them and their builds: 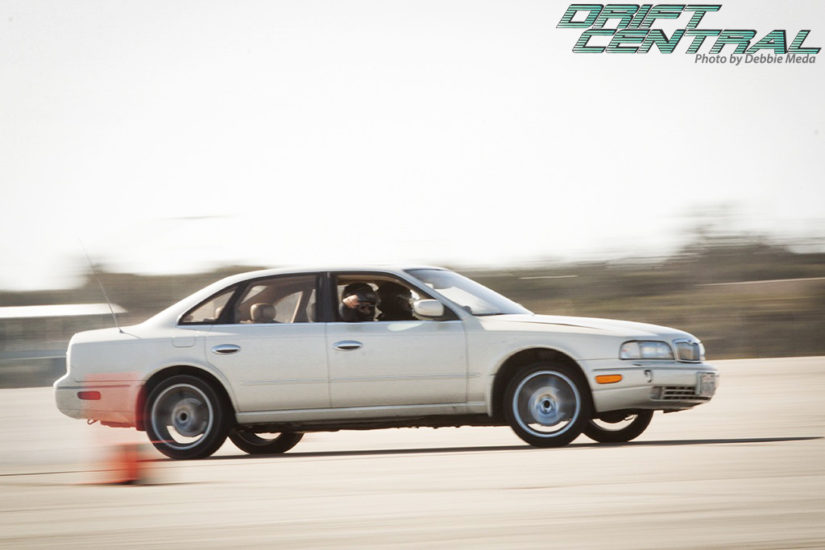 Bio From hitting backwards entries to carrying full lock drifts Jodecé has proven that his twin-cam 13 is not just a capable coupe but also a great developer of talent as he regularly jumps into his Infiniti Q45 and makes swinging the big 4-door look easy. 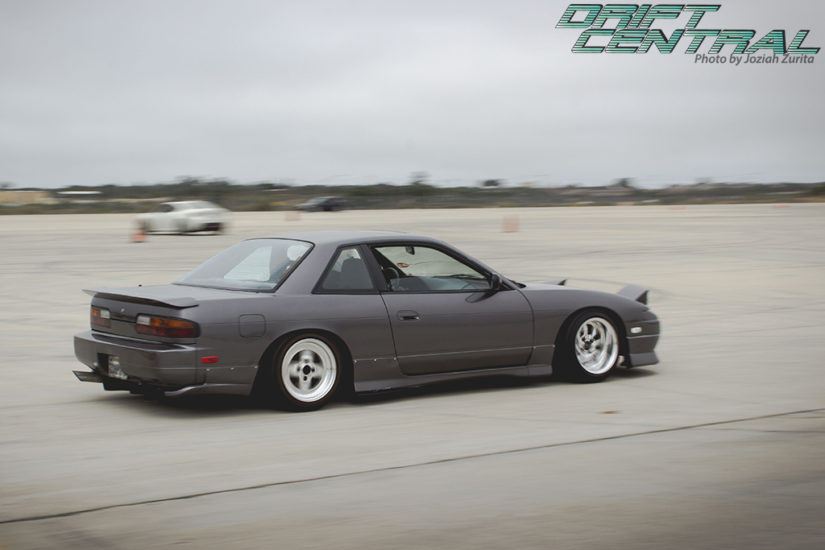 Bio Drifting any kind of “underdog motor” with a 3.90:1 ring and pinion is always a hard task but Priscilla’s drifting and exhaust tone are deceiving enough to fool you into believing her vehicle is equipped with much more than a single-cam KA. 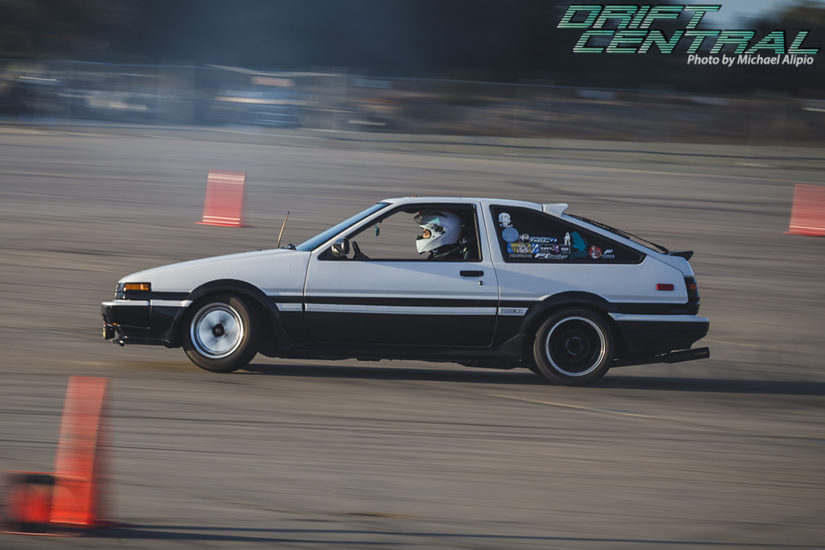 Bio Perhaps nothing brings back the Hot Version/Option nostalgia like drifting a classic Japanese car. Which for Aaron involves full commitment kamikaze runs in a car that is built in the image of the JDM heroes of old. 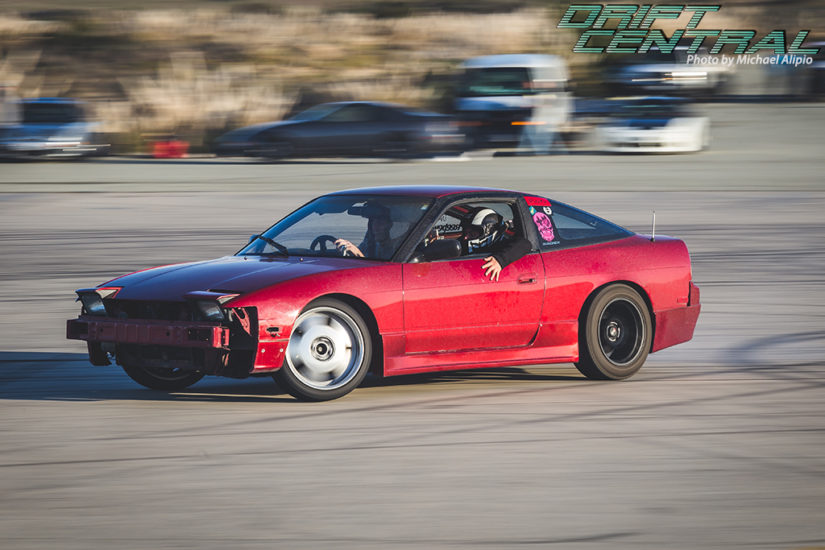 Bio For drivers who are used to doing the best with what they have a KA engine with advanced timing makes a world of difference; this applies to William as he takes his RHD converted 13 and adapts it for his signature manji style entries.

Next we proceed to the questions:

What modification or modifications are essential to drifting an underpowered vehicle? Why?

Jodecé: I would have to say the correct suspension setup is key to drifting an underpowered vehicle so you can feel the weight transfer of the vehicle. The less amount of body roll the better in my opinion so that the car breaks traction easier and more predictably. But you also do not want a ridiculously stiff setup as to where you’re bouncing around. Find a happy medium that you are comfortable with.

Priscilla: I wouldn’t necessarily say that my mod is essential; but running smaller wheels does make drifting much easier. Unless you’re super on it or have a bunch of camber, bigger wheels seem to be harder to spin. Smaller wheels make an underpowered car less edgy.

Aaron: I think that coilovers and an LSD are a must. You guys don’t have to weld your diffs; a stock LSD is plenty and will save you from breaking axles and eating through tires too quickly.

William: I stripped the inside of my car of all unnecessary things such as carpet and sound deadening to save a little weight. I also run solid motor and gearbox mounts and a quick release hub stacked on a fixed hub to put the wheel in my lap. Like most of us I use a welded diff, obviously, and some say a bucket seat but I don’t have one yet.

What is one adjustment you make to your vehicle so that it’s better suited for drifting?

Jodecé: Once again I would say suspension is your best bet as far as making it better suited for drifting. But as an actual adjustment I would say alignment specs play a huge role in how your car will drift; especially if you’re in the “under the 150 HP club.” Some camber up front helps for lateral grip. About 4-degrees of negative front camber is a decent start, even less will do. But on an S-chassis 4-degrees and 2-degrees are a night and day difference. I’m currently at 7-degrees but wouldn’t recommend that as a daily set up. And also I forgot to mention that caster plays a huge role in initiating with low HP and maintaining drifts. I like to be above 6.5 and would suggest it especially if you have the room in your wheel wells.

Priscilla: Getting the right alignment specs dialed in. You’d be surprised as to how much of a difference a few adjustments can make in regards to how your car feels. For example, if your car understeers a lot you can dial a little bit of toe out and it will give you a little more initial turn in without having to inflate your rears too much.

Aaron: I used to run a full exhaust, but switched back to stock everything after getting a ticket from the 5-0. Blessing in disguise (drift-wise anyway). Straight pipe exhausts rob you of torque and can change your power/ torque band. My stock exhaust has a 4-2-1 manifold and creates more back-pressure, which widened the engine’s torque band by about 1,000 rpm. The difference was very noticeable. Also, pump up your psi on your rear tires. This decreases your contact patch and makes breaking traction easier. I run between 35 and 38 psi on the rear and 30 psi on the front.

William: Advanced timing for more “ummmph”! Just remember not to overdo it and to run a high octane gasoline to prevent detonation.

Jodecé: I personally like to initiate with a slight weight transfer leading into inertia drift depending on the situation. But usually it’s inertia to maybe one clutch kick and just keep it. Once you get good at controlling your inertia, you’ll be able to hit some high speed entries. Middle of third then drop into second when you feel like your power is starting to dwindle down. Oh and also, don’t let off on sweepers or you’ll straighten out; find a way to adapt your driving so you can stay on throttle through corners.

Priscilla: One, stay on the gas as long as possible; I personally only lift for a second when I’m transitioning, then I get right back on it. And two, focus on taking the right line. If you’re tandeming with someone with more power, try to take the inside line. Or, if there’s a huge sweeper that you’re having trouble linking and you think you won’t be able to power out of it; try to initiate a little later.

Aaron: Never lift- pin it to win it LMAO for real though; building speed before a corner is essential to holding a drift. Low power cars can’t afford to lose momentum since we can’t generate speed in between corners. I don’t use my e-brake either (mostly because it’s too weak to lock the tires). Instead, I find it easier to initiate with a quick flick and a clutch kick. Clutch kicks are very helpful for low-powered cars and can help you jump back up to your power band and keep you sliding. Don’t worry about rippin’ huge angle drifts either, slower cars are about shallow angle and just yolking it as hard as you can.

William: Inertia drift is probably one of the more important things in a low powered car. You may not be able to stretch those super long turns but you could still “manji” or “sanpatsu” drift in between and carry your slide as well as show some style.